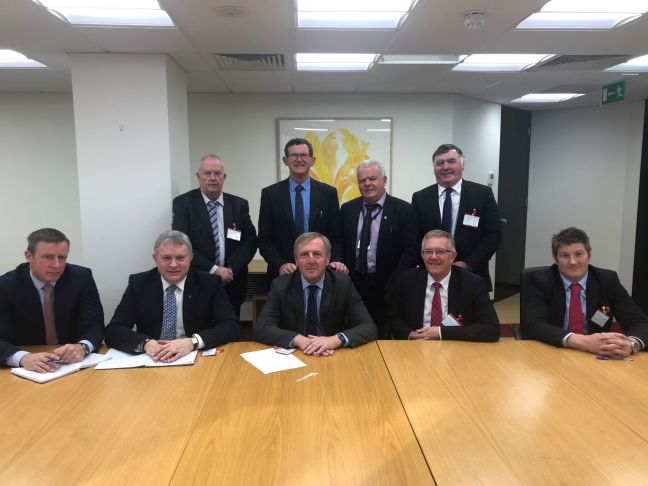 SDLP Agriculture Spokesperson Patsy McGlone MLA led a delegation to Dublin to meet Michael Creed TD Minister for Agriculture, Food and the Marine to discuss a number of concerns facing the Agri-food sector in the mouth of Brexit. Mr McGlone was pleased to receive assurances by the Minister that the EU27 will not be move on the backstop, as agreed last December and reaffirmed in March. The backstop is there to underpin the progress of the Good Friday Agreement and the peace process and stability it delivered, including the economic progress and business development without which agriculture and the agri-food sector would face an extreme threat.

Speaking after the meeting, Mr McGlone commented, “We are pleased to have had a very detailed and comprehensive meeting with Minister Creed concerning the threat to the sector here in the North, which unlike the sector in Britain, is unique.

“Farms across the North are extremely dependent on the Common Agriculture Policy that provide 83% of financial support for farms here. As Brexit looms, the financing of farming is under extreme threat, as too is the interdependent relationship between the North and South, if the Irish backstop is not upheld.

“Likewise, without an all-weather backstop, labour supply issues in the hospitality and food processing industries will face unprecedented pressures, with no measures or policies in place to mitigate the shortfall.

“Assurances by Minister Creed, who today reiterated in the strongest possible terms, the long held position by the EU that there will be no movement on the backstop position as agreed last December in the interests of protecting the social and economic livelihood of the island of Ireland, is extremely welcomed.”

“The SDLP have long understood that more than any other industry, farming requires certainty. We would urge those intent on dragging the North out of the Single Market and Customs Union, to consider the irreparable damage they will cause to the Agri-food sector across Ireland.”

Note to editors – Sean Fitzpatrick and Jim Carmichael of NIAPA and Ivor Ferguson and James McCluggage from the Ulster Farmers’ Union attended the meeting.